Get ready to be hit in the face with an iron fist of thrash metal insanity... after ten years of several EP and demo outputs, Crucified Mortals release their first full-length album. Comprised of eleven horror tales transcribed into metallic hymns the album continues the bands' own appalling sound with arguably their best material to date. A truly unique style of well-played and evil fucking thrash with hints of death metal that showcases a diverse range sure to satisfy the ear's craving for speed, heavy and memorable riffing complimented with harsh angry vocals and pounding drums. Hammer the nails & thrash 'til fucking death! 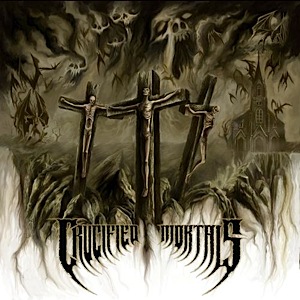 ® "There is anger abound here! Plenty of it! This is macho shit! With a lot of cojones! Musically, there's all the classic thrash metal riffs with a bit of ancient death metal touch here and there. Well, there's not really a big difference in the riffs, really, but how they are played. Death metal, black metal, thrash metal: three products of the same cow" -Currents

® "Born from the unholy congress of [CELTIC FROST's] Morbid Tales and [SLAYER's] Haunting The Chapel. With virtually the same guitar tone throughout, one may accuse Crucified Mortals of beating a dead horse, but when that skeletal steed is so rancid, so damn metal-infested, it's hard to hate...solid as a headstone. Fans of LAIR OF THE MINOTAUR, take note" -Zero Tolerance

® "Here's a bit of a throwback to the mid '80s when the fault-lines between primitive death and thrash metal were still being drawn. Crucified Mortals' self-titled debut perfectly nails the sound of the era with slightly sloppy playing, an analog-inspired production, particularly in the drum sound, and all of the right songwriting elements. Composed of some of the members of the long running cult act NUNSLAUGHTER, Crucified Mortals pile catchy riffs upon a generally quick approach that never quite makes it to the blastbeat era...a dead-ringer for DEATHROW... In short, Crucified Mortals' debut is well-done, old- school death/ thrash from veterans who are obviously intimately familiar with the era" -About.com

® "Well-written, energetic thrash in the vein of RAZOR, SODOM, SLAYER and KREATOR, with vocals that remind me of a mix between Tom Araya and King Fowley. This is definitely a pretty authentic record, minus all the fashion-thrashin' bullshit, with a serious take on the style that does not belay the intelligence...definitely entertaining while it lasts, and credit should be given that Crucified Mortals entirely avoids the self-referential pageantry that has plagued new thrash acts throughout the 21st century. These men obviously care about the real deal, listen to all the right influences, and their output is indisputably sincere. In fact, I'd say I enjoy this more than a number of NUNSLAUGHTER releases, and certainly more than a lot of the less interesting US thrash retroverts like WARBRINGER or LICH KING" -From the Dust Returned webzine

® "It is time to dust off the denim and leather, sew those patches back on and get thrashing! I would describe this album as 'satisfyingly unfashionable' for several reasons. Firstly, this is thrash metal how it always used to be, not how it has been 'remembered' ' dark, grisly, aggressive and slightly rough around the edges, Crucified Mortals sound like thrash metal fans who have definitely been there since the beginning, probably beating up glam rock posers outside the school gates. Secondly, this thrash album isn't laced with sickly-sweet melody like so many modern metal albums that claim to be influenced by thrash metal. Instead, this self-titled album is enjoyably tune-free, concentrating on caving your skull in with brute force rather than pouring sugar into your ears...containing everything you probably already knew about thrash metal: powerful, crunchy, dark, frenetic riffs, brief, guitar-mangling solos, and is pretty frantic and energetic throughout. What may actually be a surprise, though, is how good it actually is" -MetalTeamUK.net

METAL MANIACS Review (by Mike Abominator):
Crucified Mortals have been around in the underground for a while now (2001 to be exact.) This started as a one man project founded by Craig Reaper to bring some thrashy death metal to the infernal party. Now with a full line up that also features fellow Nunslaughter friends, and after a slew of killer demos, EPs and splits, we now have the debut album from these Ohio maniacs. And these guys play some crazy, barbaric and bad ass death thrashing madness that reminds me of Carnivore gone death at times. The Whiplash, Bloodfeast and At War influences are there as well. Not too bad to be compared to those 4 gods huh'Just imagine that mixed with some other thrash and death influences and you get a basic idea as to what Crucified Mortals sound like. It is all done with good songwriting and an old school approach.

The album starts off with the creepy intro 'the Seance'. Then takes off with the first song 'sordid Treachery'. It has a manic and fast beginning, that goes into some mid paced banging when the vocals kick in, then back and forth. It keeps the mid paced murder going for a bit with some heavy as fuck riffing. Then it speeds up again. The vocals are aggressive and attacking, and have that At War/Carnivore vibe to them. 'Hidden Tomb'comes up next with it's killer thrash gallop. The simple and straight to the point riffs shred along and the song keeps a mostly fast pace until it slowwwwssss down a bit for a headbanging part. Then picks up again. GREAT RIFFS! They are brutal yet catchy! 'Resurrected Fiend'has one of the best riffs on here as it's opener. Another fast banger that then hits the middle part and slows down a bit into a mid paced headbanging part. FUCK YEAH! This song rules! The soloing from the guitars is KILLS. Each song has a trade off part where the guitarists shred the shit out of everything in sight. 'Figure In Black'is next. Total relentless fast banger here for this one. But yet another mid paced break to give us some breathing room. 'Desecrating The Dead'starts off as a fast ripper as well, has a short break and then takes off again. It is shorter and it is done before you know it. But a killer song regardless!

'Perpetrator'continues the deadly assault. Another short and sweet fast banger that rips your throat out. It attacks and bludgeons the ears with sheer anger and violence. I FUCKING LOVE IT! 'Ghastly Affliction'starts fast, with it's sing along chorus. And things stay fast the whole time on this one. The production is clean, and you can hear everything, but it's not over-processed at all. It has a dirty old school sound. 'Fatal Scheme'is up next. It has a nice roller coaster effect of having time and tempo changes that are all over the place compared to the other songs. But the same killer riffs and deadly attack are here,so that's all that matters. I love the way the bass sounds on this album, which often gets lost in many recordings. The bass clangs like a chainsaw and cuts through in the mix. The old classic 'Masked Murder'is re-done here, and crushes with more of the same madness, but then slows things down for a bit with it's slow/mid paced banging thrash riffs. 'Doom'brings the album to a close with some killer double bass and more of the same great riffing. It does pick up pace with some faster parts that remind me of early Destruction. It slows a bit with more killer guitar solos and then ends with an all out speed assault! KILLER!

Crucified Mortals have come to kick some ass and take some names. They came to do 2 things: 1. Drink your beer and 2. Kill You! And they are almost out of beer! Killer debut album that has been much anticipated. These maniacs bring the pain, death and hell on here as we knew they were capable of. This is some dedicated and dirty thrash death, that is murderous and sounds like it comes straight from hell. It's simple and catchy, straight to the point. But it also grabs you, violently beats your ass, kills you to finish the job, and then stomps on what remains. Just like bands of this style SHOULD do! ESSENTIAL!!!!!! GO GET IT NOW!!!!! Another gem from Hell's Headbangers!

Recommend this Item to a Friend   Product Feedback
Write a Review